Today was a travel day and to be honest, it was probably one of the two most miserable days on tour weather wise.

We hoped on the bus in Hopfgarten, headed for the Swiss Alps. We were to take a lunch stop in Vaduz, Liechtenstein and a mid afternoon stop in Lucerne to do some watch shopping.

After crossing the border into Liechtenstein, we stopped at a cafe for lunch and had a chance to get our passport stamped in the 6th smallest country in the world. I got out some Swiss Francs out and and bought lunch which was a schniztel sandwich and chocolate milkshake. It was much nicer than the usual pringles and soft drink for lunch.

The heaven’s opened up on our way to Lucerne and it didn’t stop for anyone. Arriving in the bucketing rain, we walked across the Wooden Chapel Bridge but didn’t really get to take the view in as 1, it was bucketing with rain and 2, we just wanted to get somewhere warm. I was pretty disappointed that I couldn’t get any photos of the bridge and surrounding buildings. Here is what Lucerne looks like on a sunny day, beautiful isn’t it?

These photos are  what Lucerne looked like on the day we arrived.

Harry’s Watch Store was our next stop and I was beyond excited about this experience. I had said from the start of my trip that I was going to buy a Swiss made watch in Switzerland! YAY!

It was warm and dry when we got into Harry’s which was a relief to everyone. I was excited about the watches but most people were pretty happy just being out of the rain. We got our own special welcome then was left to explore for what probably was an between half an hour to a hour. I was not leaving before I had bought a watch so I had to scramble back downstairs and start hunting out the perfect piece. I tried on a few ‘more expensive’ brands but nothing seemed to be taking my fancy until I found Swatch; bright, bold and fun.

I browsed the selection, noticing a few watches that I definitely took my fancy. One was standing out like a sore thumb (in a good way!!). It ticked all the right boxes: Bright and eye-catchy, silver/metal (not plastic or rubber), dimenties (shiny shiny) and it was a shade of pink (ok, it was more purple, but I could live with that ). The one box it gained a cross in was that the face was quite large. I have really small wrists and generally larger faced watches don’t suit. I looked but declined before I tried it on; however none of the others I liked really ‘stood out’ when tried them on. A few other girls had seem me looking at it and said, just try it on Candice! So I got the assistant and we ventured off to the display cabinet and got it out. She took it off the stand and handed it to me and I felt this flood of nervousness come upon me. I really liked this one but what if it didn’t look good? I’d have to start all over again. Luckily for me, and for everyone else in the shop I was holding up (tehe!), it was a perfect fit. The face surprisingly didn’t look overly massive and it was just perfect., TICK, TICK, TICK! (Bad pun?) It wasn’t too badly pricing either so everything was falling into place. (It is something I wear every day now that reminds me of my greatest holiday to date.)

Venturing back the coach and it was still raining so we got wet, again. It was time we made our way to Lauterbrunnan, Swiss Alps. The scenery during the trip was incredible even though it was raining the entire way there.

On the way to Lauterbrunnan, Cindy, our tour manager, said that if anyone wanted to book addition trips after this Contiki, to see her after we arrived. I still hadn’t decided on what I was going to do in Scotland for 11 days so I thought I might see if there were any trips around the time I was there. Someone also mentioned to me a company called ‘Haggis Adventures‘. They are a sister company of Busabout (another travel company who do tours around Europe). Haggis did tours just around the UK. I thought to myself, that sounds like a pretty good idea, I’ll chase that up when we arrive in case Contiki don’t have any tours.

After arriving at the Camping Jungfrau, we stored our bags in our rooms. Most rooms had some sort of balcony and our view was incredible. I took some photos and planned on sending them to my mum. 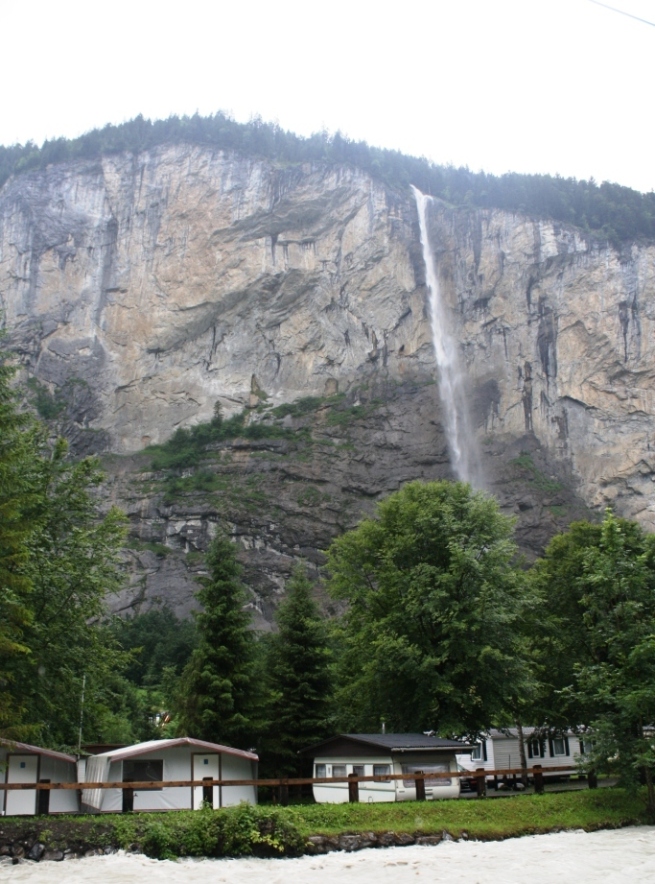 I look some time out before dinner and went down to the computer lab, near the reception. I logged in for about an hour and found a Haggis Tour called, Island Explorer. It was a 7 day tour which departed from Edinburgh. It was going to cost me approx. $530 excluding accommodation which is paid for on the way. The tour left on the Saturday after I was in Liverpool and came back on the Friday night and I was due to leave Scotland on the Sunday morning. It fitted in perfectly but I still wasn’t sure because I hadn’t heard whether Contiki had any spots left. Cindy was going to get back to me after dinner. I decided to sleep on it, I sent an email off to my mum asking what she thought of the tour.

Dinner was up next and it was my turn to help out. Everyone was assigned a job and split up over all the stops we had. It was my turn to be what was called a ‘dishie’. I had to clear all the dirty dishes and take them into the kitchen once the people had finished eating. Not a huge problem when you have people helping you but that was the issue; lack of help. I ended up staying back late because not one else took the initiative to do the small jobs like wipe down the tables and push their own chairs in. I was however, rewarded by the forever grateful on site staff. A handful of chuppa chups, shot of Chilli liqueur and a hawaiian lay later, I ventured off to my room to get ready for what was happening after dinner. That was the EURO 12 Grand Final!

As most of you already know, I love my football and two of the greatest national teams in the world were eyeing off the trophy; Spain and Italy. Naturally, due to my major dislike for the Italian team (who robbed us in the 2006 World Cup), I was cheering for Spain. The game was a cracker and to my own delight and the hatred of others, Spain won with an impressive 4-0 victory!

During the game, our tour manager Cindy has confirmed with me that Contiki had no spots left on their England/Scotland tours. I had showed her the Haggis tour and she though it sounded great and that I would learn a lot more going with others, rather than by myself. I had pretty much convinced myself that I was going to book but I just wanted to see what my mum thought of the tour.

I didn’t stay long in the bomb shelter bar that night because I knew that tomorrow was going to be a big day. I was excited for the snow and an adventure on a cog rail.