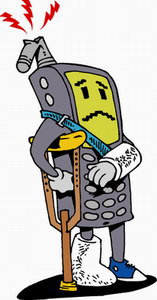 Tonight, in order for me to sit and watch Roger Federer play in the Australian Open, I ran before dinner. I couldn’t find my iPod in a hurry so I decided to take my phone as my music player. Better than nothing right?

I have a Samsung Galaxy SIII and up until the last month or so it has been great. About a month ago I updated the software and ever since then it has been playing up. It resets itself and doesn’t load apps properly. NOW, after taking it for my run, the screen doesn’t work? Umm WHAT THE EFF? I haven’t dropped it and I haven’t had it near any water. All the buttons work and the screen lights up but there is no sensors to pick up movement on the screen.

Looks like I have to take it back to Telstra tomorrow which will probably take 4-8 weeks to get an answer on what’s wrong. Luckily for me, I have a spare iPhone 4s which I have moved my sim card into.

Bloody technology. Who really wants it?