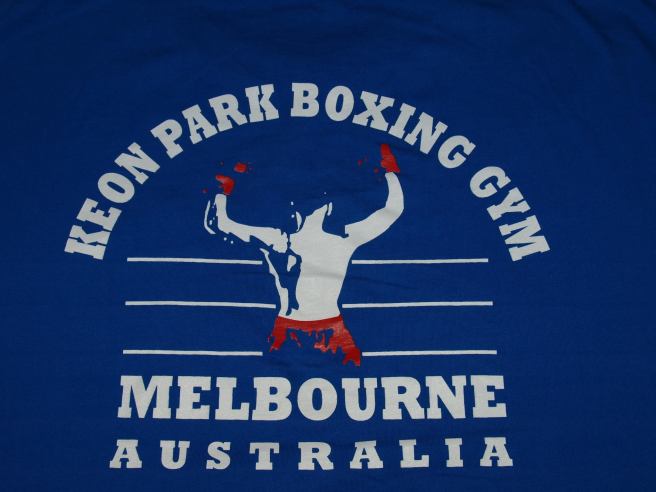 Last Thursday night saw me go to my uncle’s boxing/fitness class for the first time ever! He has been asking me to go for the last 2 off seasons of football and I declined his offer both times.  Why did I decide to take him up on his offer? It was for a number of reasons.

I have so much power and strength in my legs, not only from running but from all the physio I did while I was recovering from my knee injury.  However, I have little to no upper arm strength and ZERO core strength.  My plan has been to tone up and loose the last few kilograms before footy starts again but my body and weight is just plateauing and I decided I needed to try something else other than running.

My cousin used to box every week with her dad but because of work and school, she stopped.  We chilled out a few Saturday’s ago and she was telling me she wants to work out again but she doesn’t have the motivation to go.  I told her, “If you go to boxing, I will come with you BUT you must try hard because you are only cheating yourself of a proper workout if you don’t.” So it was a sign, sealed and delivered plan.  I was to go to this class once, just to see if I liked it.

I was pretty nervous to be honest because I didn’t know anyone apart from my uncle and cousin and I wasn’t sure how the people in the class were going to treat my cousin and I (being related to the instructor) but it was a pretty good night. Being 40 degrees at 7.30pm and having no air-conditioning in the gym, it was always going to be tough.  If I could manage to make it through tonight, I was only going to get better.

We started with a warm up that was pretty much all cardio which was absolute win for me because that’s all I’ve been doing for the last 4 months.  My legs felt it but weren’t screaming, “I’m tired” which I was quite pleased with.  I felt good. Bring on the next challenge. BOXING

I’ve never boxed in my life.  I hope I never have to use the skills I’ll eventually have, but what a work out for your arms.  We (my cousin and I) partnered up and took turns at punching the bag 10 times then while the other held it in place.  A round is 3 minutes, just like a boxing round, then you hit the deck for 5 push ups or sit ups.  I’d say we did that for maybe 20 minutes?  I think I improved as I made my way around the circuit of bags. Mind you it was my first time remember, so any improvement it good.   Boy, were my arms dead afterwards but the session wasn’t over.

Floor exercises. Just one thing crossed my mind. FML!  I probably couldn’t do these to save my life.  The only thing that I can relatively do is sit ups.  I wont give you a run down because it was a complete fail on my part but I WILL keep trying to improve.  I will hopefully will have a flat and defined stomach afterwards.

It is only today that I can walk around and move without being sore somewhere.  I still went for my run on Saturday and Sunday (even with the muscle soreness) and they were pretty successful. I even surprised myself on how much I enjoyed the class. (Even with those nasty core muscle exercises) There is a class tomorrow night however if I want to attend Thursday’s class, lets just say, I’ll just be running tomorrow instead.